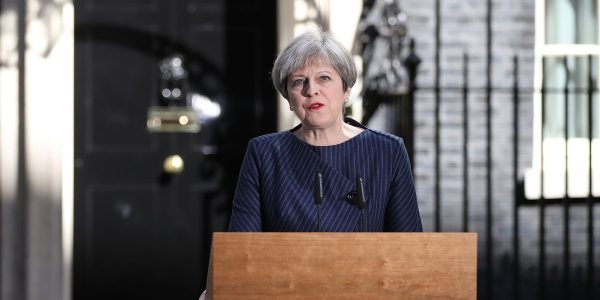 Change happens – Especially in financial terms and it was an announcement that stunned the nation and markets as Theresa May set the date for a snap election and reinforced her stance – ‘Britain is leaving the European Union and there can be no turning back.’

In the hours leading up to the surprise and unscheduled speech from Prime Minister Theresa May, the pound fell 0.3% against the dollar. Following May’s interesting call for a general election on 8th June 2017, the pound rallied against the dollar and is now trading at its highest since February.

“The market reaction has been muted so far. Sterling sold off initially and has now come back. But it will take investors some time to digest the effects of the election in the next few days. A big factor for them is whether the election will make a softer stance on the Brexit negotiations more likely. The election should hand Theresa May a much bigger mandate to stand up to the harder line, anti-EU backbenchers which currently hold a disproportionate sway over her party’s stance on Brexit. That would be welcomed by financial markets. There’s also a decent chance of some volatility now with imminent elections in both the UK and France.”

It’s been less than a month since May triggered Article 50 and the formal Brexit process began and I imagine much has been discussed in the corridors and House of Parliament. So how will May’s election U-turn help with Brexit uncertainty? The next general election was scheduled for 2020 – a decision reinforced by Tory officials and Theresa May herself as recently as March, stating they didn’t want to cause instability during Brexit negotiations. This was combined with the fixed-term Parliament’s Act that states elections must be held every five years, unless dissolution of parliament is voted through with two-thirds of parliament voting in favour.

Bartholomew commented on the surprise, saying, “no one was expecting this. Not least because the Government itself ruled an election before 2020 out barely four weeks ago. But Theresa May has clearly smelt an opportunity to consolidate her mandate ahead of the Brexit negotiations.” So is this a clever move that can put the opposition at a disadvantage?

Whilst there’s no doubt that this announcement came as a surprise, some Senior Tory officials have been pushing for a general election claiming that an election would help her push through the Brexit mandate with less resistance. So, is this election announcement a sign that May now agrees she cannot get the legislation she needs through the House of Commons with her current slim majority? Plus she may have realised re-election could be uncertain in two years if the Brexit negotiations falter.

How Team-Building Can Make A Difference

“There should be unity here in Westminster but instead there is division,” May said during the election announcement. “The country is coming together but Westminster is not and a rift in Parliament will damage the government’s ability to make a success of Brexit.” Do you think this stance shows May as a strong leader or a gambler? I remember occasions in the past when serving with special forces where I faced challenges and managed to unify my team rather than divide them. This was essential to complete our mission. I continue to use this ethos when working with my clients helping them to develop fantastic and effective team-building strategies to achieve success.

Now appears to be a good time for the Conservatives to call an election, with a poll on Monday putting the Conservatives 21-points ahead of labour for the first time in nine years, according to the Times. However, if the Brexit vote taught us anything, it’s that the polls cannot be trusted. We will have to wait and see whether the snap election will get May the outcome she wants, bringing more Tory lawmakers into Parliament to back her Brexit.

If you are interested in learning more about how to change a negative into a positive and develop a winning strategy then click here and leave your details. Then one of my team will contact you find out how we can help.

The future certainly is interesting and I look forward to keeping you updated as things develop.